Internet: Past, Present and Future

This event will take place live via Zoom on Thursday, December 3rd at 3:30pm PST/6:30pm EST. Not in PST or EST? Check your time zone.

Cerf is the co-designer of the TCP/IP protocols and the architecture of the Internet. In December 1997, President Clinton presented the U.S. National Medal of Technology to Cerf and his colleague, Robert E. Kahn, for founding and developing the Internet. Kahn and Cerf were named the recipients of the ACM Alan M. Turing award in 2004 for their work on the Internet protocols. The Turing award is sometimes called the “Nobel Prize of Computer Science.” In November 2005, President George Bush awarded Cerf and Kahn the Presidential Medal of Freedom for their work. The medal is the highest civilian award given by the United States to its citizens. 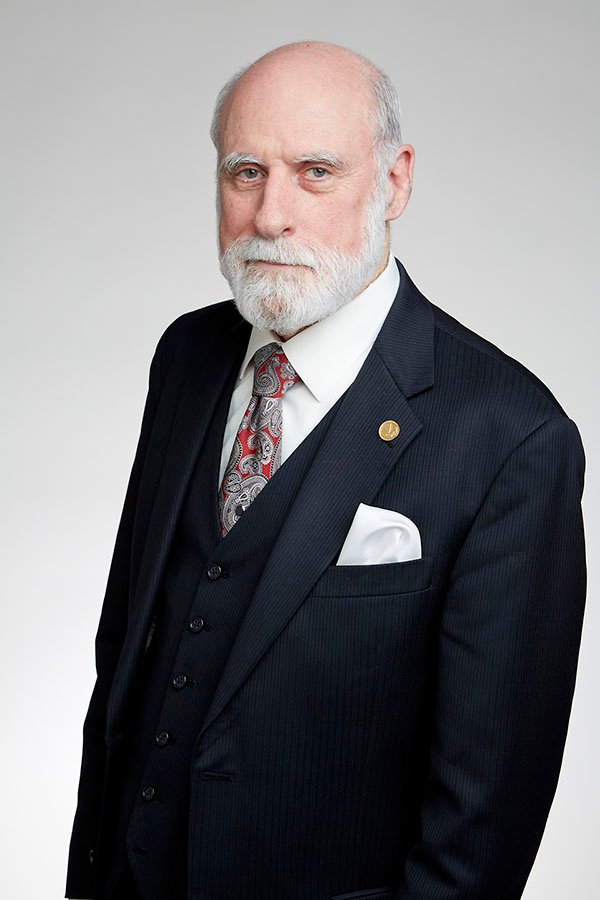 Vinton Cerf is vice president and Chief Internet Evangelist for Google. He contributes to global policy development and continued spread of the Internet. Widely known as one of the "Fathers of the Internet," Cerf is the co-designer of the TCP/IP protocols and the architecture of the Internet. He has served in executive positions at MCI, the Corporation for National Research Initiatives and the Defense Advanced Research Projects Agency and on the faculty of Stanford University.

Vint Cerf served as chairman of the board of the Internet Corporation for Assigned Names and Numbers (ICANN) from 2000-2007 and has been a Visiting Scientist at the Jet Propulsion Laboratory since 1998. Cerf served as founding president of the Internet Society (ISOC) from 1992-1995. Cerf is a Foreign Member of the British Royal Society and Swedish Academy of Engineering, and Fellow of IEEE, ACM, and American Association for the Advancement of Science, the American Academy of Arts and Sciences, the International Engineering Consortium, the Computer History Museum, the British Computer Society, the Worshipful Company of Information Technologists, the Worshipful Company of Stationers and a member of the National Academy of Engineering. He currently serves as Past President of the Association for Computing Machinery, chairman of the American Registry for Internet Numbers (ARIN) and completed a term as Chairman of the Visiting Committee on Advanced Technology for the US National Institute of Standards and Technology. President Obama appointed him to the National Science Board in 2012.

Cerf is a recipient of numerous awards and commendations in connection with his work on the Internet, including the US Presidential Medal of Freedom, US National Medal of Technology, the Queen Elizabeth Prize for Engineering, the Prince of Asturias Award, the Tunisian National Medal of Science, the Japan Prize, the Charles Stark Draper award, the ACM Turing Award, Officer of the Legion d’Honneur and 29 honorary degrees. In December 1994, People magazine identified Cerf as one of that year's "25 Most Intriguing People."

His personal interests include fine wine, gourmet cooking and science fiction. Cerf and his wife, Sigrid, were married in 1966 and have two sons, David and Bennett.