Prototype 007: Culprit with Thugfuc*er, No Regular Play Live and Droog

Posted by Kenya Robinson on 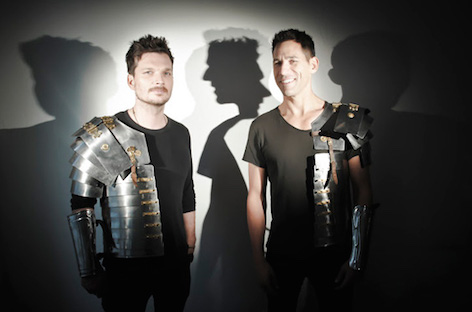 Thugfuc*er are an American/Icelandic/Interstellar duo comprised of Greg Oreck and Holmar Filipsson. Since their fateful coming together over a decade ago, the mischievously named group have become members of the elite echelon of underground house and techno artists. In the last 5 years, Thugfuc*er's notoriety has been inextricably tied to the meteoric rise and rise of the Life and Death label, which was famously kick-started by TF's massive "Disco Gnome" single. The label catapulted to the top of the proverbial heap, led by the "The Triple T Triumvirate" of Thugfuc*er, Tennis and Tale of Us.

Together with Tale of Us, the boys (II men) have formed an occasional supergroup also bearing the Life & Death moniker. This collaboration yielded music for Kompakt, Visionquest and BPitch Control. Thugfuc*er's already enviable profile has been receiving enormous boost from their immaculate sets at the annual Burning Man gatherings.

The TF boys are no strangers to Culprit, having headlined the label's Sonar festival showcase last year and remixed for the label. Their glorious remix for Culprit featured the other guests at our party - No Regular Play.

NRP are one of the select few acts in our global scene who have managed to combine proper musical training and love for authentic dance music. Their trumpet-live keys-vocals show is one-of-a kind, bridging the gap between the indie arena and the dancefloor. No Regular Play rose to notoriety as long-time members of the Wolf + Lamb/Crew Love family of artists and together with Soul Clap and Wolf + Lamb themselves remained the clan's most consistent creative force.

Droog are, of course, the founders and leaders of Culprit. Their involvement with pushing the deeper strains of dance music in LA stretches well beyond the label's 2009 inception. The trio are set to mark a decade (!) of putting on parties in Los Angeles next year. In this time, they have joined the global cast of vagabond DJs and recording artists in their own right. After a 6-year stint hosting rooftop parties at the Standard Hotel, Andrei, Brett and Justin have now made LOT 613 and Prototype their new home.