Join us in a night of laughs as we support fellow alum, Ito Aghayere, in this new comedy show "Carol's Second Act".

A new CBS comedy from "Trophy Wife" creators Emily Halpern and Sarah Haskins that centers around Carol Chambers (Patricia Heaton, "The Middle"), who after raising her two children and retiring from teaching, embarks on a unique second act: she's going to become a doctor. Co-stars include: Kyle MacLachlan, Bonnie Dennison and Ito Aghayere. 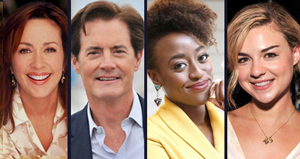